New Orleans Cuisine, unto its own.

I thought that I knew what New Orleans cuisine was. We had grown up together and was blessed with many opportunities to enjoy the great culinary establishments of the city, but returning home after a culinary tour of the USA my view has changed. It is like living under a blanket, not wanting to feel the cold of change of anything different than what was before. While in culinary school, my hometown approached me in a new way. It was the only city in the entire USA with its own dedicated days of cuisine cookery. Getting to know where I am from, made me proud of where I am from...but, it is different down here. New Orleans was settled and resettled by several different ethnicity, all lending their heritage to what we know as New Orleans cuisine. In contrast, some places of settlement in the North East have never strayed from their roots, lending the cuisine to be boring and comprising of mostly chains. For a meal in New Orleans, fast food isn't the only option. The same price of a combo meal at any chain, can get you a meat, two sides, and some bread at several local eateries throughout the city. So moving to the point. I have been called a "Yankee" since back home in the kitchens of New Orleans, for reasons of speech and ambition. It seems silly, to apologize for passion, but it is the exact reason why I stopped cooking earlier in my career. My family has been in the area since leaving Germany four generations ago, and I am the only one left of my family. Who knows what the future holds but with all of its eccentricities, New Orleans is an acquired taste...
No comments:

Mexico Via Way of Dublin, street. 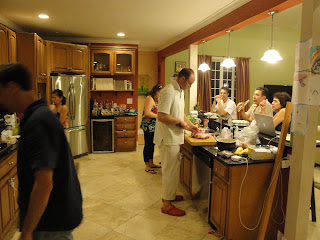 "Why do you cook on your day off?" is the question frequently asked whilst cooking a meal for guests, hopefully the answer will appear on their palate, as we all know practice makes perfect. But it is never laborious to cook, always a joy to meet new people, learn new stories and introduce my dog to new smells. So onto the party... 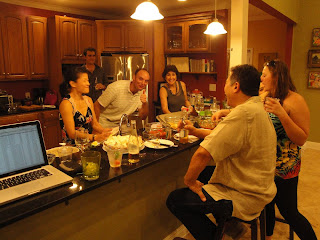 Mexico was the theme of the night and guests at this culinary adventure were from Louisiana, Michigan, Peru, France, and Houston. With a Latin country's theme, and Peruvians on the guest list it was important to flex my gringo Latin gastronomic muscles. It was easy to flex, as we were able to procure fresh chili's, limes, and bay leaves from an urban garden in the riverbend. Here is what we came up with...

The enchiladas are a steadfast recipe in my repertoire. It is simple. The meal started with the brine. Toasted cumin seeds, rosemary, thyme was met with sugar, salt, oregano, fresh New Mexican chili powder, and peppercorns. Once you can smell the spices, they have started to release the oils on their surface, add water until all are dissolved in the liquid. Add ice to cool down mixture and marinate meat for grilling. Sunshine enchiladas get their name from the sauce, it is a Californian's Bechamel. Make a blond roux, add onions and chili's, whisk in milk until proper consistency, add cilantro stems and simmer for twenty minutes. Place mixture in blender with the cilantro tops and blend smooth. Grill the meat, shred or slice into the desired size. Blanch corn tortillas in a little oil, fill with meat, cheese and raw onion. Place sauce in bottom of oven dish, line up enchiladas, pour sauce on top and place in the oven.
The seared filet carpaccio was left to stay at room temperature. A spice blend of chili powder, cumin, salt and pepper coated the outside of the meat. Olive oil in the skillet was left until almost smoking, the filet went in and stayed untouched and unshaken for three minutes, then flipped and poullet meat with cilantro, butter and garlic. Rested for fifteen minutes, sliced and finished with lime zest and sea salt.
Pico de gallo was skillfully cut by a Michigan guests and devoured with chips alongside a few libations. The ever flavorful juice from the vegetables in the pico were mixed with grilled corn, fresh tomatoes, red onion, basil, and chili powder. The corn relish went sensually well with the seared filet, adding texture and freshness to a robustly flavorful dish. Jessie's friojles was a combination of innovation and tradition. Using the pork bone from the enchilada pork meat, and peppered bacon, a quick smoky pork stock allowed the beans to simmer delightfully with sauteed onions, grilled peppers, garlic and cilantro stems. Squash was fresh and marinated in oil, oregano, pepper and salt, then grilled and covered in previous marinate to allow the flavors to permeate back into the warm vegetables. Rice was pilafed and finished with fresh oregano and cilantro. Dessert was provided by a slightly sweet refreshing lemon custard below a hardened sweet meringue. 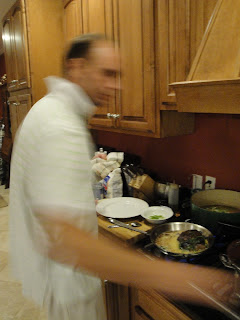 It was a good Friday meal. The tunes in the background were reminiscent of the islands, Steel Pulse, Jimmy Cliff, Peter Tosh. The Mexican beaches were some six hundred miles away, but with the music, food, and people it seemed only a short distance. Not to be forgotten, Jerry a local saxaphone player and neighbor stopped by for a plate and dropped a little New Orleans melody via the brass wind instrument.
No comments:

It was an amazing day in the city of New Orleans today, rain most of the afternoon lead into a majestic sky over the drunken revelers of Bourbon Street. Taking the streetcar back to the house it became an improvisational dinner party with the guests from Louisiana, France, and Peru. The meal started with the fresh scent of bread coming from the oven. Whilst the air was filled with a yeasty aroma, the table was prepared with pate, salad and moutard. The bread was ready, and honestly homemade bread is probably the cheapest gastronomic high one can get. The warmth of the bread was met with a chicken liver pate, dabbed with moutard, meeting the palate as old friends having not seen each other in a while, enjoyable and satisfying. Served with the pate was a tourchon (simply means towel in French, because in the old days a towel was used to form it, and mostly refers to circular formed charcuterie). This particular tourchon was a coarse chicken liver forcemeat around apples and plums, wrapped in bacon then poached in the previous days hock stock. It was pretty neat and unexpected when the plum skin leached a pretty ruby color into the center of the tourchon. The palate cleansing salad was a simple celery, parsley and herb mix tossed with oil, vinegar, pepper, and sea salt. Tasting alongside the meal was a crisp refreshing champagne of beers, HighLife.....
No comments:

Well Monday was a good day off, it was a day of leisurely cooking, moderately drinking, and interesting conversations. Guests of the dinner party were representing Peru, Louisiana, California, and France. The menu was an evolutionary endeavor which made its way from inception to plate with many different meanderings but ended up creating a smile once reaching the palate. Then Menu contained:
Chicken Liver Pate w/ Plums, Apples and Leeks (Sake Plum Wine)
Salad Fresco
Hock Stocked Rice w/ Hock Meat and Leeks
Garlic, Rosemary, Plum Stuffed Pork Butt
Peruvian Bread Pudding
Berry Salad w/ Creme Anglaise
Vouvray

In purchasing all of the ingredients for a leisure day off meal, one must ensure the frugality of the day by spending more money on wine than on food. Holding true to this theory, the main protein of the meal came in at a whopping thirteen dollars and the hocks only add a few dollars more. Once the pork butt made its way into the kitchen, the marinade/stuffing needed to be made in order for the flavors to commingle amongst themselves. Crushed garlic, rosemary, flat leaf parsley, white pepper, salt, nut meg, clove and all spice where place together in a bowl and bound with olive oil. After taking out the bone out, the butt was butterflied into about one inch thickness. Spreading the mixture on the inside of the meat, then placing sliced plums on top of the pork, made it a happy little pig. Once the pig was tied, a vegetable rack was made out of fennel, onion, celery, bay leaf, and thyme. The roast was placed on top of the veggie rack and covered with plum sake. Placed in an over at 200F until it is ready, it was an uphill battle trying not to peak in and take a look, but the longer the door is shut, the better the food...Patience. The hock stock was simple. Rinsed off the hocks, placed in cold water with onion, thyme, garlic, leek tops, celery and allowed to gently simmer until all of the delicious porked smokiness was released into the water. After a few hours of hanging out in the pot, the vegetables and hocks had given away all the flavor they could and it was time to strain. The liquid was used in two different ways. First, medium grained rice was allowed to cook in the stock along with scalloped leeks, the hock meat was then added back providing more texture and smokiness to the rice. Second, a small bit of stock was reduced along with pan drippings from the oven into a glace, which was deglazed with the plum sake and garnished with sliced plums, and cilantro. I had almost forgotten about the chicken liver pate, it was simple. Brown butter, chicken livers until golden, vegetables, deglaze with plum sake, emulsify in blender with heavy cream, garnish with sliced fruit and blanched leeks, refrigerate and serve on house made bread. The salade was composed of Romaine spears, cabbage, chiffonade of Romaine, creole tomatoes, and an Italian style garlic vinaigrette. Dessert was brought by some of the guests; bread pudding was warmed and topped with Short Street Honey(from the neighbor), and a berry and fruit salad mixed with creme anglaise gave a nice goodnight kiss to the palate. All and all it was another gastronomic adventure with food being the glue, binding together people from different places, and holding there attention while life stories are swapped.
Yooo
No comments: