Growing up in the city, I took it for advantage while here. But left for a while, and am now back in her comfortable arms again. It is good to be back, in the city that I love, with a new perspective. Here's one thing, the street car. Before leaving New Orleans, public transportation didn't really seem to be an efficient way to get around. Then in other cities, where public transportation is a must, it becomes easy. All this leads to my streetcar adventures. For the past two months, I have been riding the street car to and fro work. Yes, there is not an efficient set schedule, but if you allow yourself to expect a goofy schedule and plan for it, it works. Riding down Saint Charles Avenue, sunshine in the oaks, music in the ears, and touristic enthusiasm all around, it is a good feeling. So much history, so much food located within steps, all for the meager fare of one dollar twenty five cents and some patience. After a meal, walking the fullness off on the way to the street car line, makes that cocktail at the bar taste better, to me.

Coupled with the street car transportation, it is my fortune to walk down Bourbon Street both in the afternoon, and then again after the sun sets. Music is everywhere in the French Quarter, from the bass effects Daqauri Shops that line the streets to the musicians with a bucket, music is in the air. By far, the best performance is the brass band on the corner of Canal Street and Bourbon Street. Fancy cars, street music, a Lucky Dog Stand, Hustler Store, and a Footlocker back drop set the stage for a truely unique experience. With the mix of history, culture, and food it is safe to say that New Orleans will survive no matter what.

If anyone gets the chance, a new restaurant opened in the warehouse district called Feast, Google them if you want, I have not eaten there yet, but hope to and would enjoy a dialogue if anyone has eaten there. It's simple people, seek out and enjoy good food!
No comments:

Working in the service industry there are several personalitites, all of which are rooted in something beyond the kitchen, but the kitchen brings it all out. The chefs that don't like people are the ones that baffle me. Service industry means that you have to provide a service, to people. I am not sure how many other species on earth would be willing to pay for a plate of food, but there lack of opposable thumbs and speech make them the best clients for some chefs. Moving forward into positive town, there are people that truely enjoy what they do, and you can feel it, in everything. One of my ultimate goals is to become a ninja rockstar, and since there is no certification course for this title it is just a matter of personal taste. A rock star is someone who has created art, sings to millions of adoring fans, drinks, and pretty much does whatever whenever. On the opposite side of the spectrum is the ninja, quiet but deadly, stern but fair. A ninja is not seen, only felt. Stealthly moving in the shadows, he only shows himslef to correct a wrong. The synthesis of both is where I want to be. This may be confusing, but makes perfect sense to me. Maybe one day...Chef Ninja Rockstar will adorn my chef's Jacket.

The menu for this evening:

It will be a good meal, with ten to twelve guests not including The Breaux, thoughful food, and libation.
No comments:

With some family in town, the night was set to be a plated nice meal. The night turned out to be an amazing meal, with amazing company. Menu for the night was straight forward and simple, with technique driven value food.

It was the first time back at Dorginac's since, Oh, seven years ago. Anywho, the store lived up to what I once knew it to be. For the steak frites dish, a cow flavored cheap cut of meat is the best bet. The store did not carry hangar steaks, so we reverted West to the Tri Tip sirloin cut. Spinach was on-sale and abundant, so the more the merrier. The andouille chosen was Creole Cottage, cheaper than the Dorginac's brand and a reliable source of quality.

Toasted cumin, peppercorn then added water, garlic, salt, thyme, sugar and shallot. Dissolved spices, then chilled with ice. Covered the steaks, let brine for three hours. Once brined, rinsed they were placed on a vegetable and herb bed in a 125F oven, coming to medium rare and just waiting to be seared in butter.

Milk, smoked, turkey neck, garlic, thyme, bay leaf, and peppercorn were steeped for one hour then combined with blanched, drained spinach, blended and cooled. Frites were sliced on a Japanese mandoline, then cut into match sticks. THe sticks were blanched in oil and cooled. Once the meat was at medium rare, it was removed from the oven and set to rest for five minutes. The oil in the pan was smoking and ready to crust the meat. Seared, untouched on one side, then turned and pouleted with thyme, garlic, shallot and butter; the crust...made the steak. Blanched spinach was combined with the spinach mixture, to make amazing creamed spinach. Frites were seared off in hot oil, leaving a crunchy exterior and a fluffy interior. Sauce bearnaise was classic and well executed, leaving an emulsified buttery blanket over the steak.

Scotch Eggs, ahhhhh, Scotch Eggs. Placed fourteen eggs into a saucepan, one level and brought to a slow simmer. The eggs were ready in twenty minutes, cooled. Coating the eggs, was a stripped andouille herb mixture. Once poached and shelled, the eggs were wrapped in the andouille blanket, fried, sliced, sauce bearnaised, and enjoyed.

It was, what it should be...well prepared food, good people, and good conversation.

Thank You.
No comments: 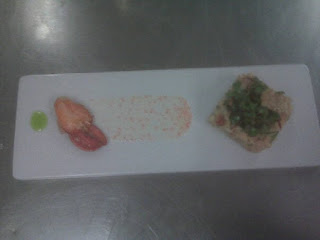 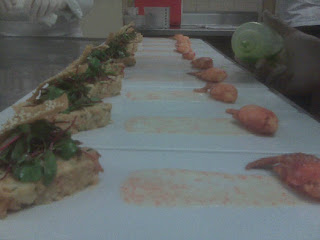 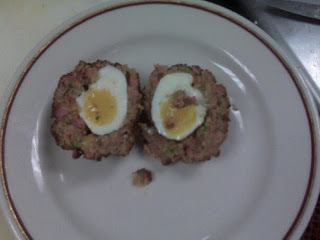 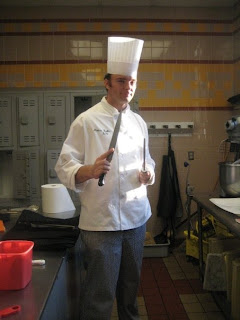 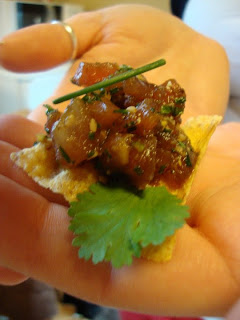 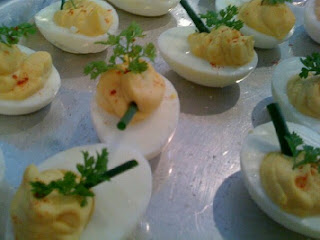 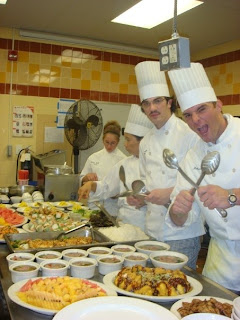 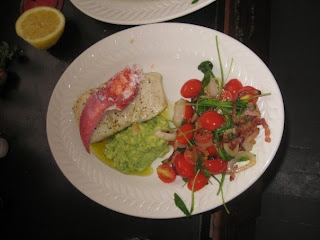 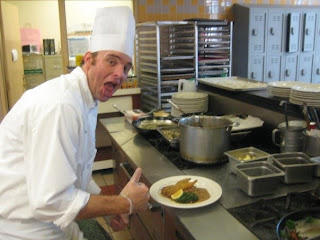 With the emerging culinary revolution in the United States, we can begin to see different genres of food starting to define themselves. One cuisine near to my heart is rustic cuisine. It embodies more than just the food, but the story behind rustic food. Each country having its own form of rustic cooking, they all have one major variable in common, soul. It is okay if you can not cut the vegetables the exact way, as long as you cared about the food when you were cutting it. Over in Burgundy, there is probably a grandmother cooking a meal right now. Grand Mere may not know the dimensions of specific knife cuts, but at the end of the day she really cares about the food. Making sure that it tastes good, nourishes the body and soul, while using local available products with age old techniques are what she cares about. Not how fancy the knife is, but the meaning that went into the cuts. It might seem a bit far of base, but my opinion is the intent behind the action makes the action either more genuine or mundane. When people are lazy, the have no intent behind there actions. A plate of food is a representation of self. I care about how to correctly cut a vegetable or animal, I care to learn the proper science behind culinary techniques, and ultimately I care about the person eating my food. It is a way to speak without speaking, what is presented is an antithesis of everything learned up until the point of the meal. So moving forward, if you happen to cook at a restaurant, take the little extra time to make someones meal amazing and not just a meal.
No comments:

Had dinner this evening at Cochon, it was okay. Cochon is a cool restaurant, the music was spot on, the decor and lighting was comfortably inviting. The menu's words tease my brain as to how amazing these dishes sound, but when the food comes to the table, it was...okay. We were seated towards the rear of the restaurant, with a bird's eye view of the kitchen and pass. There were five of us, so we got to see alot of dishes. Appetizers at the table were: the rabbit livers...it is a great dish every time, the flavor of earthy liver, fried, then topped with a pepper jelly and mint, Amazing; the hogs head cheese...the tete fromage was a fried disc, surrounded by local beans, all I really tasted was grease and fat, which is exactly what it is, but felt the disc itself needed more texture, it was good; the poached egg and grits.... this was my appetizer and disappointing, the grits were underseasoned, sauce tasted of bitter garlic, seven mushroom quarters, and an egg for ten dollars (walking around the corner, Butcher served grit cake with duck confit and mushrooms for six dollars), it was average at best; the meat pie...this dish was exactly what is was supposed to be, elevated Western Louisiana cuisine, the crust was delicate and flaky, blanketing a hearty fill of meat, vegetables, and indigenous spices, it was Amazing; Moving to the entrees, the highlights were an osso bucco style hamhock with beans and greens, bacon and oyster sandwich, the ribs, and brisket with horseradish mashed potatoes; lowlights being my dish again, oven baked redfish on the halfshell "fisherman" style, underseasoned and served with a sloppy cold onion fennel relish stuff, the dish's rustic elegance was lost with poor execution. The meal was satisfying and enjoyable, I have learned to keep my critiques silent, in order to enjoy the company and not just the meal. Cochon is a good restaurant, just wish kitchen execution was a little more deliberate and not hap hazard.
No comments: