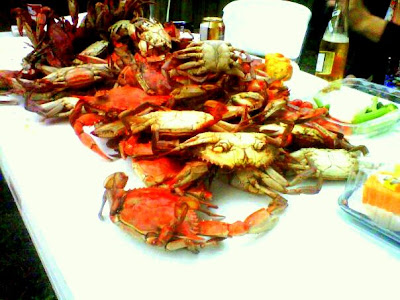 Here are a few tips on how I would do a crab boil.  There is no correct way to make it, as everyone has “the best” recipe.  But the main goal is to enjoy a few cold beverages with friends over a communal pot of crabs.  And remember, it’s just a Cajun court bouillon.
Vegetables
New Potatoes, Cob Corn, Sausage, Garlic, Lemons, Mushrooms
Seasonings
Zatarans or Rex Crawfish Boil (Follow directions on the box for measurments)
Crabs
Down here we figure three to five per guest.
Bring water to boil, add seasonings, lemons, and garlic.  Let go for twenty minutes until well incorporated.  Add potatoes, the mushrooms, then sausage, then corn and cook.  By the time the corn is done, the potatoes should be finished.  Remove all the vegetables, bring back to boil.  Add crabs, bring to rolling boil, and shut off.  Ice down the container, or if outside use a hose, not completely cold, but slow down the heat.  Start tasting crabs for desired taste around 45 minutes, or before, whenever you think they’re ready.  Dump them on newspaper, serve vegetables with some butter, and wash it all down with conversation and a few cold Hi-Lifes.
Hope this helps!
Cheers.
No comments:

Making bacon is a process utilizing two age-old preservation techniques, curing and smoking.  Both of these techniques were used before the invention of the refrigerator.  Curing draws the moisture from the protein, moisture is to bacteria like booze is to New Orleans, they thrive together but it always isn't a good thing.  Smoking was a technique used to dry out the protein, and also keep bugs away.  And using both of these techniques, with a little patience mind you, at home will spoil (pardon the pun) the palate with joy. 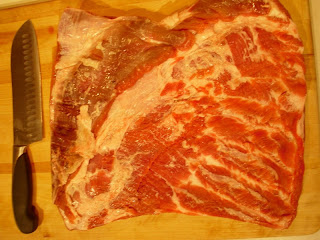 While in Pittsburgh, it was an opportunity to buy some never before frozen pork.  Omar Ifft is a third generation farmer in Evans City, PA, Iff T's Poultry farm.  Yes, pigs are not considered poultry, but since my father has an established poultry relationship with Omar, we were informed of the fresh pig he had slaughtered from his friend's farm.  Arriving on the farm, we met Omar and his two friends in the processing room.  The scene reminded me of pictures in the book Pork & Sons, where slaughtering an animal brought people together to talk, drink, and enjoy some of Mother Nature's bounty.  We bought several items, but for this story let's focus on the belly.
Omar called the Belly, Bacon.  It is common for different cuts of meat to be called different names in different regions of the country.  An eight pound belly costs us around twelve dollars, compared to one pound retailing for anywhere between three to ten dollars at the local grocery store, please beware of cheap bacon, there is a reason it is cheap. 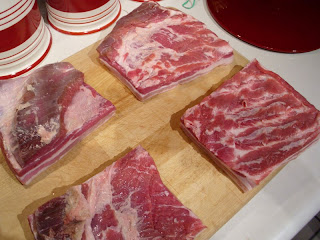 The basic cure for bacon is a mixture of sugar and salt; 1 # Kosher Salt, 1/2# Sugar, 10 teaspoons Pink Salt (TCM).  Pink Salt or TCM (Tinted Cure Mix) is composed of 94% sodium chloride and 6%
sodium nitrate.  Basically it allows the meat to retain a pink hue, as opposed to grey, and eliminates any potential leftover bacteria.  Cure the meat for three to five days, then smoke for three hours.  Bacon has been made. It seems like a long time, but the actual physical labor involved is a mere hour or so.  The mental labor of patience is the only real skill need to make bacon.
If you are reading this, you have access to the intraweb, so look up more details (or email me elliott@yobreaux.com) and make some bacon.
Happy Jazzfest!
No comments: